SUP leashes provide a simple and secure way to keep a paddler with their board. Wearing a leash should be second nature, like wearing a seat belt in a car. But do you know about the different types of leashes, and understand when and where they should be used?

The recent loss of Andres Pombo who died earlier this year whilst training on Hood River put the spotlight on leash and buoyancy aid use in Stand Up Paddleboarding. Unfortunately nothing will change what happened that day, but his loss hopefully means that more paddlers will think about safety before they take to the water, and that means thinking about leashes and the environment you’re paddling in.

History of the leash

Invented around 1970 the surfboard leash started off as a very springy and often dangerous way to prevent a board making it’s own way back to the beach. The equipment we now regard as essential to safety may have been responsible for Jack O’Neill losing his eye in 1971 from a ‘whiplashing board’. Not the best start for safety equipment!

The use of urethane for the leash became commonplace in the mid to late 1970’s reducing the whiplash effect (but not removing it) and making them far more durable. According to some sources (Surfer Magazine, 2011) 99% of surfers use one. Even with such apparent support for the use of leashes there are surfing applications where their use is questioned. The loss of Mark Foo at Mavericks in 1994 has been blamed on his leash and that discussion continues today.

For SUP use the urethane leash has been beefed up a little to cope with the larger boards and higher volumes. But they look just like standard surfboard leashes so when buying one make sure it’s suitable for your board.

There are two types of leash, coiled (commonly used for flat water), and straight (commonly used in surf and other general paddling) Both typically fit around the ankle or calf. However these leashes are also available with a quick release mechanism which then typically attached to a belt worn around the waist, allowing for quicker and easier release from your board (commonly used in moving water and also now popular when racing)

This type of leash is ideal in the surf, because it has less spring back than a coiled leash (and therefore less chance of your board coming back and hitting you in the face!) and it trails in the water leaving your deck clear to move your feet around the board. Ideally a surf SUP leash should be at least the length of your board. A straight leash is the most universal leash as can be used in not only surf but also flat water and moving water (with a quick release attachment). So if you’re wanting one type of leash to use on flat water and in the surf then get yourself a straight leash.

These are most commonly used in the flat water SUP and race scene. Sitting comfortably on the deck out of the water, they produce less drag and reduce the risk of getting caught on seaweed, and other paddlers paddles etc… Not for use in the surf due to their spring back board potential! If you do use a coiled leash in the surf (not recommended) you can guarantee it won’t be coiled for much longer!!

The quick release is an attachment that can be added to any standard straight/coiled leash, or you can buy a specialist quick release leash. Gaining in popularity the quick release leash is worn around the waist as a belt, either on it’s own or as part of a buoyancy aid/hydration pack. The quick release is a buckle, usually with a toggle attached to it so it can be grabbed quickly and pulled open, releasing the paddler from the board almost immediately. Probably developed from harnesses used by White Water kayakers this type of leash is starting to appear on the race and surf race scene too. When racing it eliminates any chance of the leash dragging in the water, keeps it out of the way when stepping back for buoy turns and moving around the board, and allows for quick and easy board transitions during races.

How to attach a leash

The vast majority of boards will come with one or more specific leash attachment points, usually found near the tail of the board. On an iSUP this is likely to be a steel D ring glued to the board, on hard boards they are often recessed into the deck. Leashes will usually come with a length of string attached to a rail saver. The string is the connection between the board and the leash.

How to look after a leash

Leashes will have a hard life! As well as being stretched, on an iSUP they are frequently looped around a rolled board to keep everything tidy, and on hard boards you’ll see them wrapped around the tail when in transit. Doing this can develop kinks in them and the urethane can easily be damaged. Therefore urethane leashes should, when not in use, be removed and kept out of the sun. It’s worth storing your leash with your board so there’s no chance of forgetting it.

Your leash is the most important bit of safety equipment you have, so check it regularly for any signs of wear and look after it. They’re not cheap, but a leash is there to save your life, so if you think it’s starting to look a bit tired and needs replacing – then replace it. Don’t just wait for it to snap!

When to use a leash?

The simple answer is always. End of discussion.

But nothing is that simple, using the wrong leash can be more dangerous than not wearing one at all.

In the sea, SUP surfing, a leash is a necessity not an accessory. And the vast majority of SUP surfers will wear a leash without hesitation. But using one is not the end of the SUP surfers responsibility. A big board at the end of a long leash could do a lot of damage in a crowed line up. And in the surf, a SUP board of any size on the end of a coiled leash is asking for trouble too! Always consider the safety of others in the water, as well as your own safety.

For coastal exploration or flatwater paddling a leash makes sense most of the time, they are comfortable and don’t get in the way, and keep you connected to your board (flotation device). However a big flat river can have a strong current and be moving a huge volume of water, just like in a WW river. UK rivers are often not clear water, carrying silt which means that obstacles under the water e.g tree branches etc… are not always obvious. Leashes can easily be caught around these objects as well as pontoons, jetties, buoys etc…

So sometimes undoing a leash would be a good idea whilst paddling, for example when getting on or off a board at a pontoon with a strong current. Better to undo your leash and climb out with the risk of loosing your board, rather than getting pinned and loosing your life.

At the most extreme end of our sport, White Water SUP there is no suggestion that any paddler would ever want to be attached to any of their kit in a way that they could not undo in any situation. In December 2014 SUPboarder ran an interview with Amy Elworthy, one of the top WW Kayakers in the UK. She said

“If you’re to be attached to something then ensure it has an easily accessible quick release on it.” 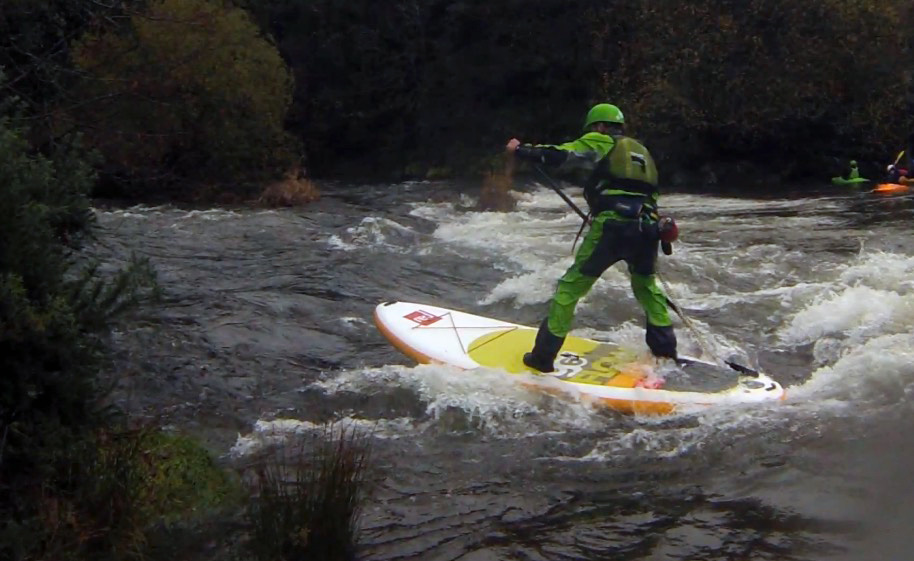 No matter how you look at it, a velcro strap attached at one extremity of your body is not an easily accessible quick release. Have you ever tried reaching your ankle against fast flowing water? Not much fun and near impossible.

So is the future of the SUP leash around our waists? Any leash can be converted to a waist leash with quick release so it would seem to be the sensible thing to do for all but SUP surfing. Is it time to put the ankle / calf leash behind us and get ‘waisted’? Let us know what you think about leashes on the SUPboarder Forum here.

Not all WW SUPers have taken to the rivers in the UK with suitable equipment, as Dan points out in the comments for this SUPboarder feature here.

And here’s exactly why a suitable QR leash is essential in a WW environment.

I would caution that a QR leash is essential in any moving water situation, whether the flow is river or tide generated.

Defo agree with that one.