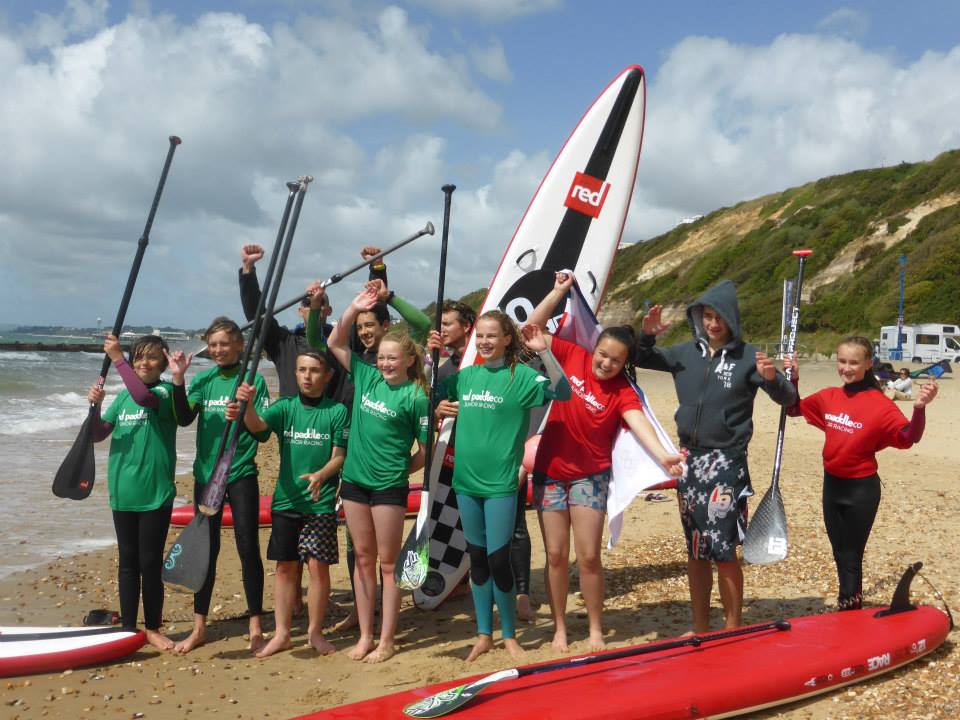 Round three of the UK SUP Clubs race series was hosted by BaySUP on 6th June. This was the first technical race in the series and a BOP style course was used with a beach start and a beach transition on each lap. Alongside the senior racers was the first of the Junior Race series and a Naish One Design event too.

Georgia Wharton was there and updated SUPboarder on the days competition:

It was a sunny start, with a steady cross shore breeze, that was expected to increase throughout the day at BaySup’s Battle of the Paddle (UK SUP clubs series- race 3). The event took place at surf steps in Bournemouth, cars and vans loaded with competitors and their boards flowed into the car park and the buzz started to build. It was a great turn out for the event, twice as many people than expected turned up with between 60 and 70 competitors, making for some exciting racing.

The course was a technical 1.1k route with three laps for all categories, apart from the surf shapes, which did two. Of course a BOP style course each lap features a beach transition, with around 40m of running per lap, a first for the 2015 series.

As well as the main racing, the event was also hosting its first Red Paddle Co Junior race series. Sam Ross and the red paddle team started their racing early, as winds were set to increase. Originally the junior race was set to be a 600m downwind style race/course, but after the young athletes made their way down to start and a few test races were done, it was decided the conditions were too tough and instead they ran 3 sprint technical races. It was a huge success. Sam’s enthusiasm and energy was transferred onto the children and they had an amazing time.

Not too long after the juniors race was finished, the senior race briefing was held, it was set to be a tricky upwind/downwind course that would test the racers.

The 12’6 men started off the race, 3 minutes after they were followed by the 12’6 women, and then the surf shapes. The race proved complex, and there was lots of action. Paul Simmons took the win, showing his skill and experience in the downwind conditions, he was then followed by Andy Joyce in second place and Damian Warner in third.

In the ladies 12’6 it was Marie Buchanan, who came in first followed by Emily King in second and Kerry Baker in third.

There was a 30 minute interval between the last 12’6 paddler and the start of the 14ft race, the 14ft men started off first, followed closely by the women, and then later followed by the N1SCO class. By this time the conditions had worsened and took its toll on the paddlers. The 12’6 were relieved that they’d started earlier when the conditions weren’t so harsh.

For the men, Sam Ross took first place, followed by Mark Slater in second and Rob Stewart in third. N1SCO class winners will follow with the full results.

After the races were over for the day, everyone shared their experiences in the race and had a good laugh. It was great to see some new faces braving the conditions and overall the day was a great triumph and lovely to be a part of.

After what looks like a great event in testing conditions racers now get a few weeks to recover before the next round, the Super SUP Sunday in Hove on June 28th with another technical course. See you there!