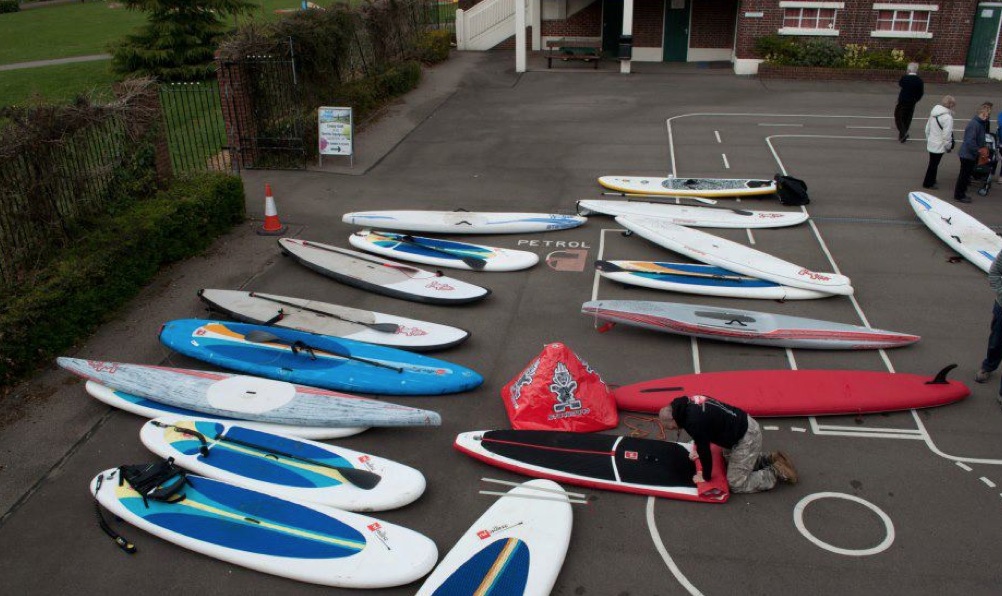 The Midlands 5ive Round.5

Rounding out the Midlands 5ive Winter Series the final instalment lived up to the ‘final’ status, with arguably the closest racing seen to date and the overall series and first ever Midlands SUP Champion to decide, the day was set to be a corker.

The final race lived up to every expectation imaginable, with all the main contenders for the top three series places taking. There were four paddlers fighting for the number one spot with Paul Williams, Ian ‘Nocka’ Tyers, Stacey Smithson and Laura Scully all in with shot at being the first ever Midlands SUP champion. Behind the leading four Neil Myers, James Adamson, Adam ‘Bod’ Dawson and Keith Wraight were all waiting in the wings in case any of the leading four made a mistake.

The race itself got off to a flyer with the river conditions being perfect to get the quick times needed to take the series victory. Initially it was Neil and Laura who got away from the line best taking a different line into the rivers flow, and the rest of the pack was in hot pursuit but it was the mighty Nocka who came through into the lead.  Fresh from his brilliant 15th overall finish in the 12’6 class in the gruelling head winds at the Head of the Dart race the previous day, Nocka still had plenty of speed in the tank and built a commanding lead by the time the pack reached the road bridge.

With a clear lead and calm water Nocka approached the buoy turn with no distractions making his way round cleanly. Things were a little more interesting in the following group however as the entire pack was all within seconds of each other. Laura led the way with a small advantage over Bod, who in turn had Stacey, James and Neil all fighting for the best line into the turn. Laura had a stumble during her turn but fortunately didn’t fall, however her board stalled and she lost all of her momentum bunching all of the paddlers up for the turn.

As Laura made her way round avoiding the trees as she drifted wide Bod and Stacey also went wide trying to avoid hitting her board, this gave James a small gap up the inside and forcefully he pushed his way through to head off downstream to chase Laura. Neil, Keith and Paul were next to turn at the buoy with Keith coming close to falling in, but everyone made it round to start the final sprint to the line.

As Nocka increased his lead after all the chaos, Laura was holding onto a slim lead on the fast charging Bod and James. It was a close run all the way to the line with Laura just losing out after a brilliant race. Neil and Stacey finished next only two seconds apart in a brilliant battle all the way from the Buoy, quickly followed by Paul and Keith. James crossed the line in a time of 12 minutes 20 seconds and the next six paddlers all crossed with thirty-two seconds of him making for a fantastic race to be a spectator.

After everyone had gathered themselves together and paddled back up to the clubhouse it was presentation and party time, and we had setup homemade pasties, tea and coffee and of course a BBQ to see in the summer. There were some Land Paddle boards on demo as well to keep everyone entertained whilst the final calculations were done to see who had taken the overall crown.

With Nocka, Paul, Laura and Stacey all finishing well in the final race it was clear they would be the four fighting for the top spots. The first three overall places in the series were decided on the best three finishes of each paddler based on points, with the times set being the overall decider.

Laura finished the series in fourth, missing out by two just over two minutes to a brilliant Stacey who took third overall. With their times of 42.55 and 40.28 respectively both ladies took the fight to the men in the series and put on a great show for ladies SUP. Paul took second spot in 37.03 which by any beginner’s standards is an incredible achievement. Paul’s success has been a true highlight of the series  as before joining us at Central SUP for the first race he had only paddled on a SUP once before.

The series however went to the mighty Nocka who consistently got quicker and quicker through the series and already is proving he is also a superb racer across the longer distances competing in such events like the Norfolk Classic and Head of the Dart. With a combined total of 35.52 Nocka was a clear and deserving winner becoming the Midlands first ever SUP champion, with a particular stand out performance in Round.4 where on an inflatable 10’6 he beat some worthy paddlers on much faster 12’6 race boards and longer all round hard boards to finish third overall in that race.

For Round.5 I was a spectator for the first time in the series and seeing the pack jostle for the best starting position, choosing differing tactics taking on the rivers flow and then everyone disappearing from view under the main road bridge, only for them to moments later to re-appear from the shelter of the trees and sprint for the line, It is a truly fantastic scene in the middle of the country and one which I hope we can all enjoy as SUP spreads across the UK.

As we look forward to a summer filled with events and of course the next Midlands 5ive due to start in June, all of the Central SUP team and its regulars and keen to get out with others in some friendly competition.

Huge thanks has to go to everyone who got involved helping out, competing in the cold and the many spectators who braved some very wet and wild days to watch the action right in the middle of the country. – Scott Warren