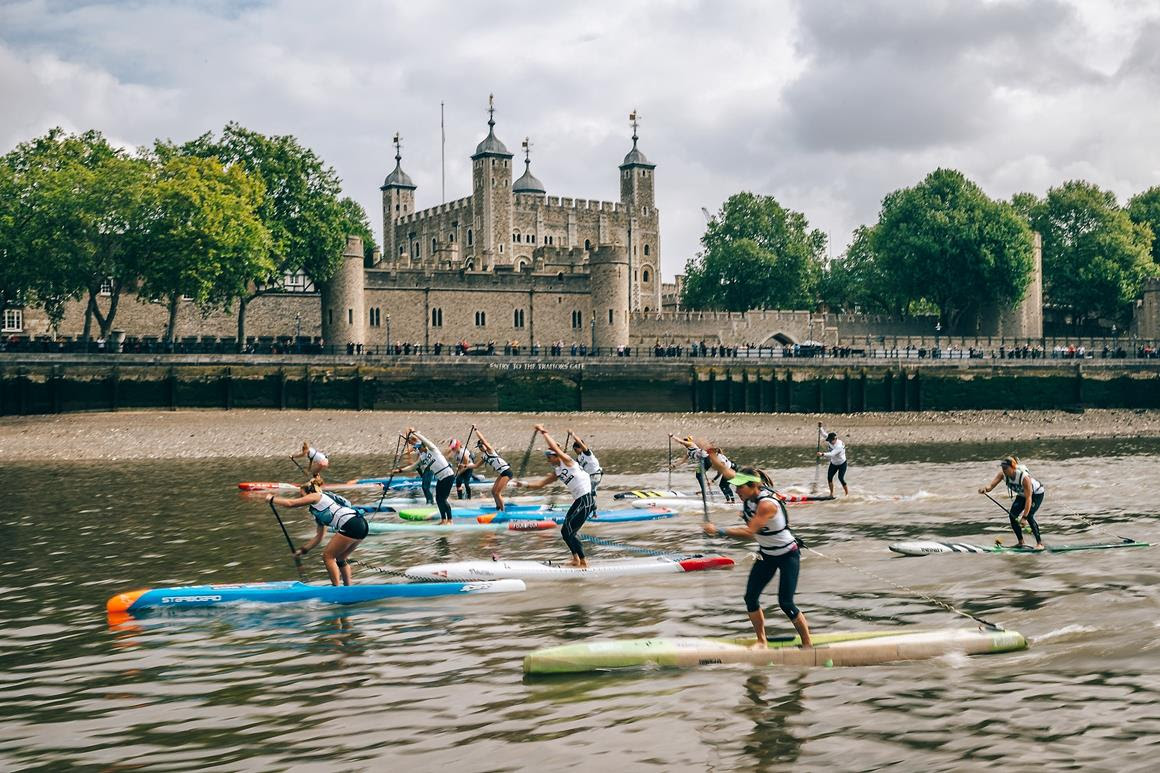 The London SUP Open broke wide open today with heated performances on  the Thames River where athletes crossed the finish line mere tenths of  seconds apart to set the bar for a competitive 2019 SUP racing season on  the APP World Tour.

Lining up under perhaps the most spectacular start line in history with  the majestic London Tower Bridge looming overhead, APP Tour athletes  -both men & women – charged off the start and into a new season  ahead. 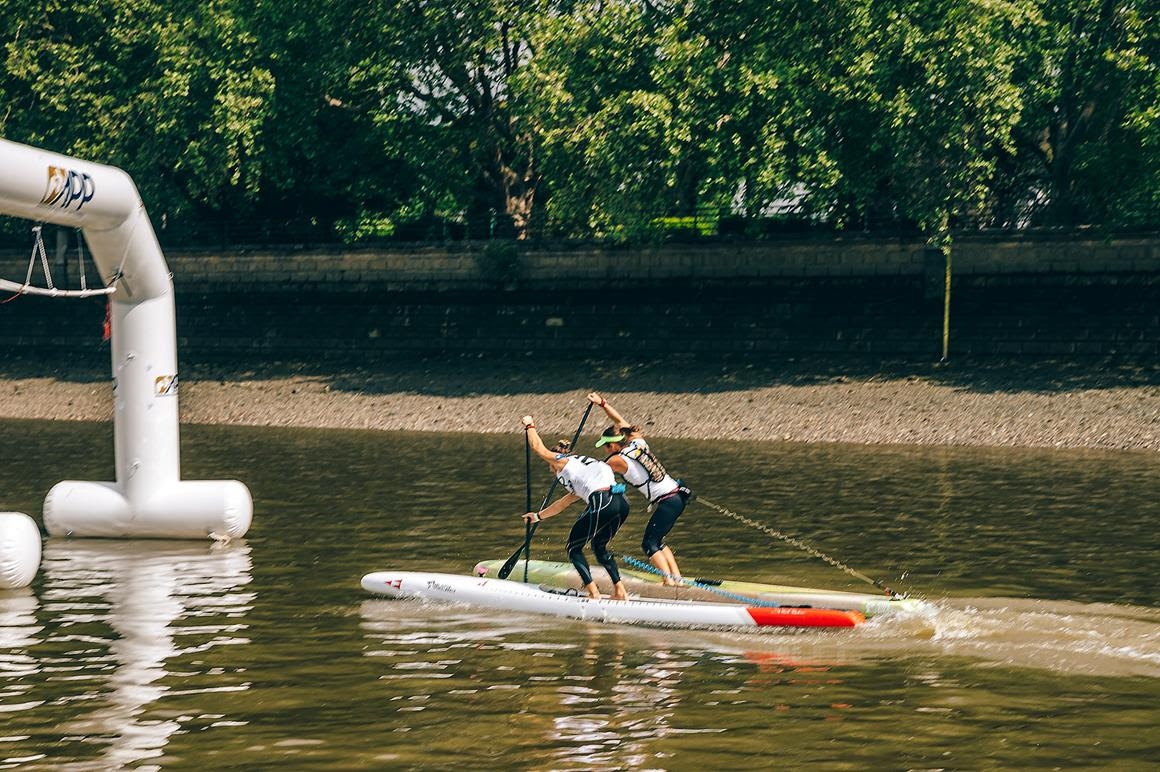 Seychelle wins, while Lina Augaitis puts on an impressive Performance in one of the most competitive distance races yet

In a clear bid for dominance, both Seychelle Webster and Lina Augaitis  came out roaring with amazing performances on the River Thames for the  Pro Distance race and the 2019 London SUP Open.

At the starting gun, Fiona Wylde lept out in front for the women,  taking advantage of passing boat wake to put herself 20 yards in the  lead.  Augaitis quickly reeled her in and postitioned herself at the top  of the women’s draft train setting a hard pace which would endure for  the remainder of the course.

It is refreshing to see Augaitis back in full form after taking a  haitus to raise her two children. Her  unwaivering athleticism, drive  and commitment to both paddling style and force clearly puts her back on  top of the leaderboard as we saw in her outstanding performance today.

The lead ground, led by Lina, included other dominant forces of nature  including Fiona Wylde, Candice Appleby, April Zilg, Annie Reickert and  Seychelle Webster. The women paddled down current along the Thames and  streamed past Big Ben, Houses of Parliament, the London Eye and under  Westminister Bridge in a fast pace that often ran at 8-minutes per mile.

“It was a fast race,” reports Seychelle Webster.. “We had the current  pushing us along at a good cllip. At the 10k mark I made a surge to try  to take the lead, but Lina and Fiona would have none of it.”

In those final yards, it boiled down to an all out sprint between  Webster, Augaitis and Wylde driving, stroke for stroke ,to cross beneath  the finishing arch. After a photo finish review, Seychelle was awarded  the win by less than half a second, Lina in second  and Fiona Wylde in third. 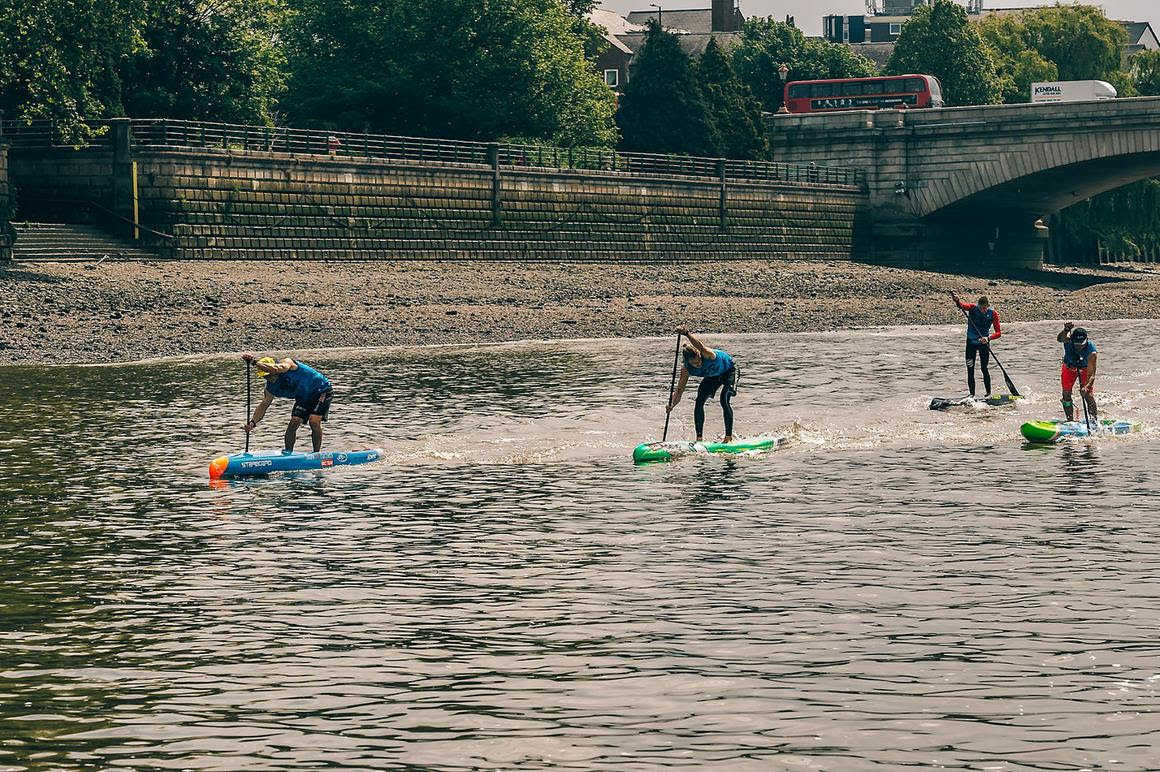 The Men’s Distance Race along  the Thames River was no less an  unprecedented showcase of incredible talent and a field of pure  competitive fire. In perhaps the most stacked lineup yet for the 2019  season, the APP World Tour solicited massive displays of performance in Titouan Puyo, Lincoln Dews, Michael Booth, Connor Baxter, the Hasulyo  Brothers and returning APP World Champion, Arthur Arutkin.

“It was tight at the front the whole way,” says Michael Booth. “And, it could’ve been anyone’s race. I tried my hand a few times at getting  away, but to no avail and it came down to a sprint finish.”

After Boothy and Bruno’s battle at the Carolina Cup, spectators knew to  look for a match up again between the two. At the starting gun, the  pack surged out onto the historic waters in a wake-filled washy mix  before settling into a draft train with Bruno Hasulyo up front, pulling  Booth, Puyo, Dews along with the rest of the pack.
“I had to race differently to what I normally do,” reports Booth, “I waited patiently and attacked just before the finish arch.”

In those furious final seconds on the Men’s Distance course, it was a  passionate drive for the finish. In the end, Booth’s massive power  pulled him through the APP arches first, followed tightly by Lincoln  Dews, Titouan Puyo, both Hasulyo brothers and Arthur Arutkin – mere tenths of a second separating the Top 5. 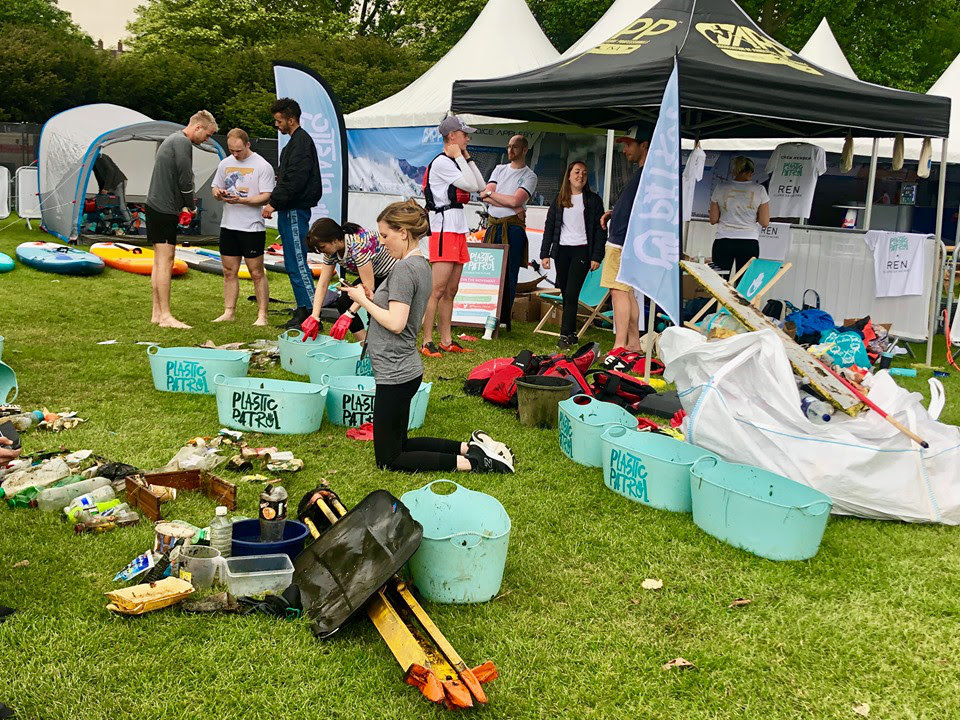 Lizzie Carr & Plastic Patrol Keeps Plastic Away & Awareness on the Rise on Canals across U.K.

The APP has been proud to continue their support their support of Lizzie Carr and her Plastic Patrol initiatives through the integration of Exploratory Paddles down the Canal as part of the festivities at the  London SUP Open. Lizzie is a popular paddler/activist who uses  paddleboarding as a way to bring people to the water to teach them about  the plight of single use plastics.

All weekend long, participants  signed up for a chance to paddle with  Lizzie along the canals at Hackney Marshes, collect debris, documenting it through photographs and Lizzie’s own ‘Plastic Patrol’ app which  categorizes findings and works with research teams to analyze where the plastic is coming from and who is responsible.

It is a fun, informative way to get on the water and Lizzie’s passion  for education (and fun!) make this a great way to discover what you can  do to be a part of the solution by becoming a member of Plastic Patrol  in your own neighborhood.

In addition to the Clinics, Lizzie took part in a Q&A on the  stage and premiere a new documentary on her adventure down the Hudson  last year in conjuunction with the APP’s New York SUP Open. More to come on this, so stay tuned to www.appworldtour.com and follow us @appworldtour