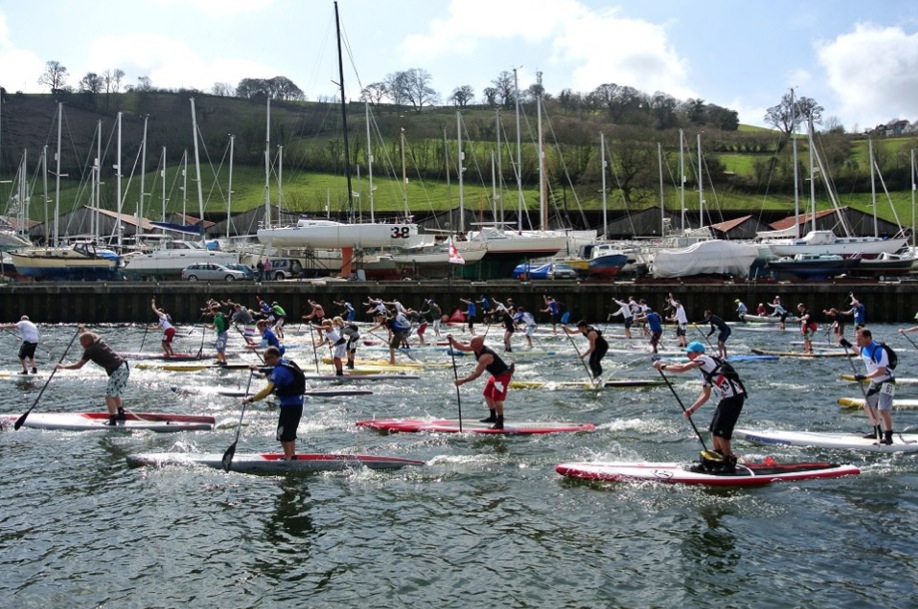 Passionate SUP racer Dr Bryce Dyer is back, but this time sharing his top tips on how to gain more speed and up your overall performance throughout the long race season…

There comes a time as a season wears on that your gains in speed become increasingly limited, or you start to get some mental fatigue as a result of ‘train, race, repeat’. The reality is that it’s hard sometimes to keep on it, day after day, week after week and month after month. Even elite athletes in many sports may only intend to peak two or three times a year and their season length will be dictated by this. UK-based SUP racers on the other hand can have a long season. For example, many of the big events started early April and the UK SUP national series can often head into October. That’s 8 months and is long by any sports standards. It’s going to be tough to keep at your best for that long and the science says you shouldn’t if you want to be at your best when it matters. This all said, going fast on a SUP board isn’t just a case of paddling fast – it’s a symbiotic relationship between man and technology and is basically one big system. What does this mean to you ?

It means that you don’t need to focus just on paddling hard to get faster but an understanding that to get faster, you need to maximise the things moving you forwards and/or reduce the things slowing you down.

In my own research, I suggest an athlete’s success is based upon the management of ‘assistive and resistive factors’. So with all of this mind, here are 10 low cost, lo-fi options for you to pick up a little bit of speed for not a lot of effort…

Hydrodynamic drag being what it is, the less surface area or things you have moving around in the water, the faster you’ll go. I’m actually a fan of scaling the fin to the size and force output of the paddler but nonetheless, trying a fin that is a little smaller than what you currently have might make your board a little tippier but it might add some speed too. Read more about race fins with Bryce’s feature here : sup-technical-bryce-dyer-looks-sup-race-fins

This is a touchy subject for many of us (and one I personally avoided until I entered my 40’s). I’d spent 20 years relying on exercise as the sole basis to keeping my weight stable but as I age, our metabolism slows down and you become a true reflection of your lifestyle choices (read ‘sins’ !). The reality is that SUP paddling performance is influenced by a paddler’s power to weight. To move faster you can increase your power but this will be increasingly difficult to do the longer you are involved in a sport. Secondly, you can reduce your mass. This means you cut down the amount of energy you expend as you have to accelerate yourself every time you apply a stroke in the water. Taking a look at your diet in terms of its quality and quantity could shave more kilos than buying a new lighter board.

Get a computer or GPS with stroke data

There is an argument that suggests SUP racing is instinctive and that you don’t need technology governing your decision making, However, knowing aspects such as heart rate, current speed and stroke length can tell you a lot of what is going on with you or with the conditions. Consider races like this year’s Head of the Dart – At the race briefing we were instructed to always try and hold the centre of the river as this was both fastest and safest. This advice was born out when in the latter stages, a fast group that was behind me (comprising Team Starboard’s Ben Pye and Crispin Jones) took the shortest distance through one of the bends towards the end of the race. However, when I decided to start to move in to cover them, I noticed quickly on my GPS that my board speed was dropping fast and my stroke length drastically reduced – Put simply, I was moving out of the main river flow. Yes, I would have saved a few yards but the loss in speed wasn’t worth it. I opted to stay out where I was and increased my gap to them. Without that information, I wouldn’t have known.

Go with the unfamiliar

Sometimes racers can get locked in to a pecking order finishing order mentality. They finish in front and behind of the same people time after time as that’s what their brain tells them to expect and accept. Changing the race distance or style of racing or racing outside your normal region can allow you to make breakthroughs you wouldn’t get by doing the norm.

Boards run aground or can strike objects in the water and this can take the odd nick or chunk out of a fin. Those imperfections will disrupt the water flow and as a result, will create drag and slow you down. Get some sand paper or emery cloth and a flat sanding block and spend a minute or two getting them out.

You may not have noticed but when you paddle on rivers, lakes and the sea, the board does pick up grime. This grime, (even if you can’t see it) can affect the skin drag of the board and again can slow you down. Hydrophobic coatings are used on some watercraft but you can get somewhere close to this by using washing up liquid or degreaser. There is also some social responsibility attached to this as cleaning your gear prevents bacteria and contamination being spread from place to place. 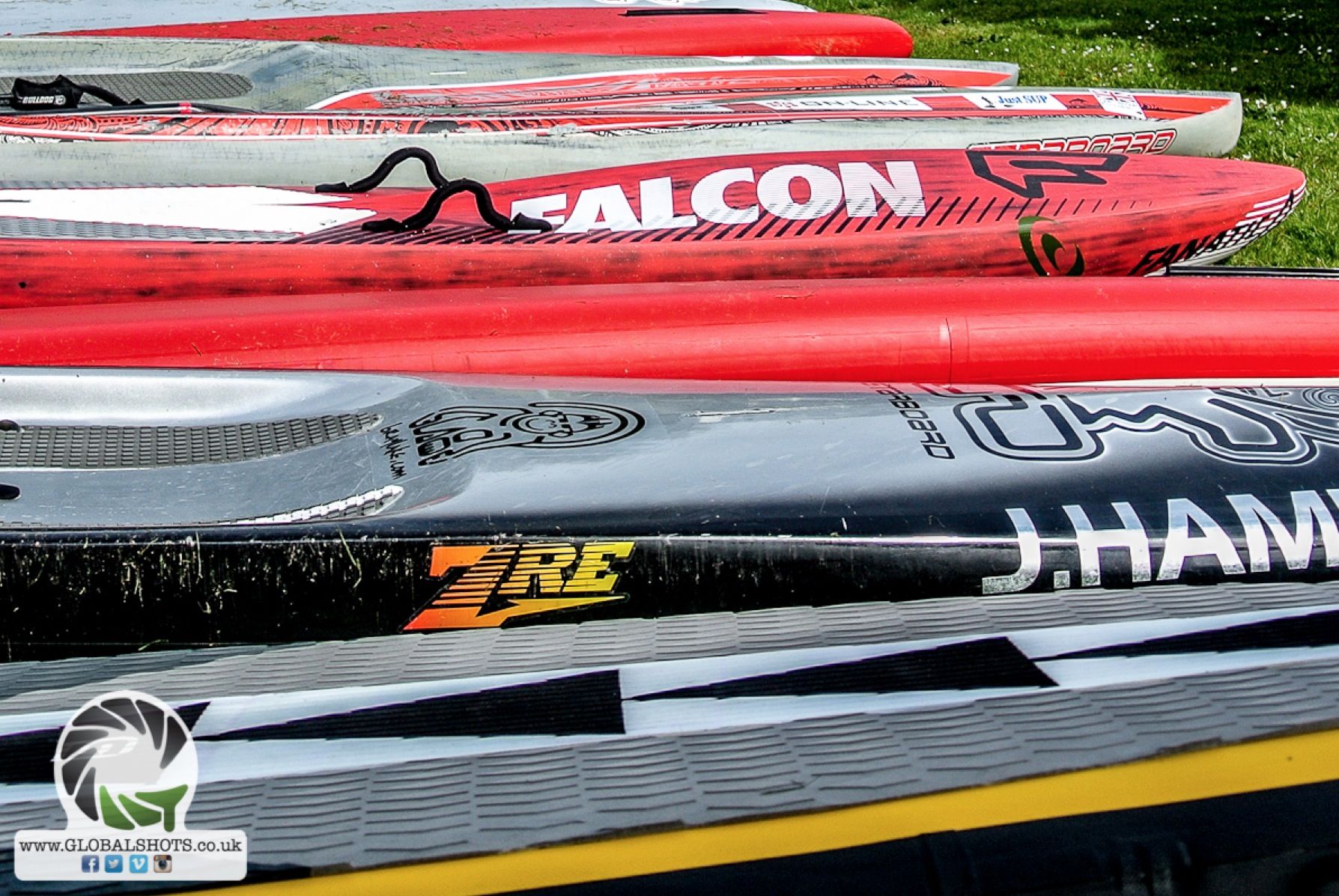 To be honest, this is something I’ve been aware of for years but literally only implemented in the last couple of months. This is different to the weight management issue I mentioned in tip 2. Eating for performance involves eating the right stuff pre training/racing and doing the same after it. If you’re worried about your weight, this may seem counterintuitive but with a fired up metabolism and some sensible eating, I’ve personally found this lets me train harder, for longer and to recover faster. Keep that up for week after week and you this can allow you to do more and therefore get faster.

The jury is still out on this one for me but I do performance some strength work at the important times of my racing year. For example I train with ginormous paddles sometimes. The reason is to develop sports specific strength that I have found helps apply extra force when needed or to be flexible to adopting a wider range of stroke rates. Go easy with paddles though – they can be joint wreckers. However, there are alternatives such as towing tennis balls off the tail of the board. This will increase the boards drag substantially but means that you need to apply more force to the catch of your stroke to keep your momentum up.

I’ve been known to wear the odd bit of lycra in a race since the second I started racing in the sport. I probably (and quite reasonably) looked ridiculous. The reason for this though is that aerodynamic drag can be a factor – even at the low speeds we experience (and particularly when you’re as tall as I am). Hit a headwind section and your body could be subjected to a breeze of around 20-30mph and that’s the same as a racing cyclist will see. Board shorts and t shirts are only a fashion statement. Plus, if you get wet, they’ll hold more water and for longer and that could add a kilo or two back on the board. I’m not saying run out and don the spandex but a bit of thought on what you wear can make a difference.

Learning to hop on the draft of a faster paddler can send you rocketing up the field in terms of position. Even if you tire and have to drop back sooner or later, you could gain yards that your competition may have to spend a vast proportion of their own race chasing back down.

So, before you go and splash out on a new faster looking race board, go back to basics and consider all of the above. These low cost, low-fi options may be just the solution to increase your speed, overall performance and position during this years race season.