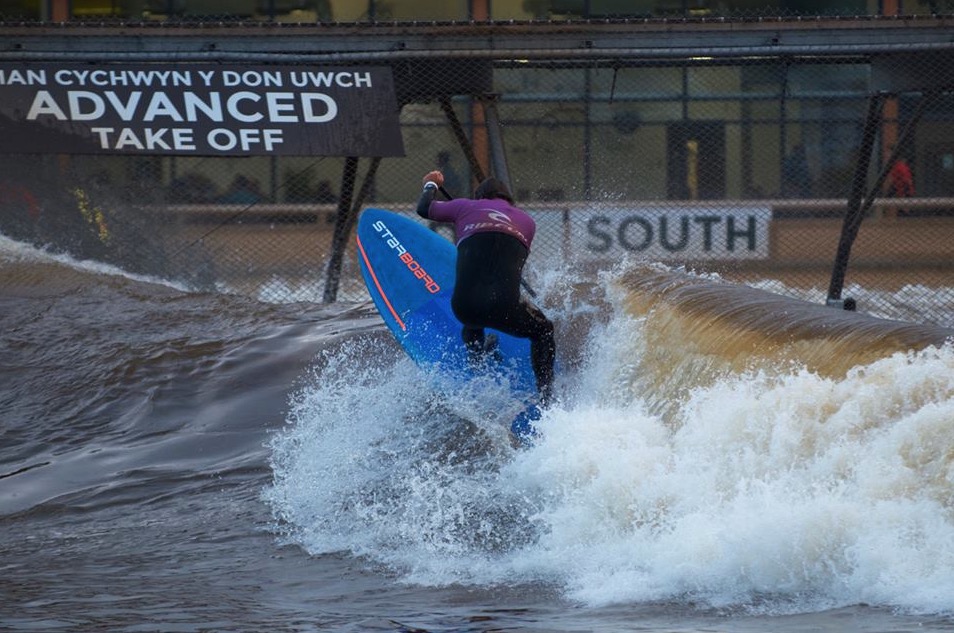 Waves can be found all around the world. And thanks to recent wave pool developments decent wave rides can now be enjoyed inland as well as at coastal spots. Surf Snowdonia in North Wales in one such wave pool situated 10 miles inland from the coast. With both beginner and advanced waves produced at the push of a button endless waves are on tap. But as Andrew Pieterse who recently visited Surf Snowdonia for the 2017 Starboard demo, explains, it’s not as simple as that! Surfing a fresh water, man made wave has a very different feel from a ‘real wave’ and just being able to catch it is a challenge in itself! If you haven’t had the chance to visit the wave pool yet, then read on. Andrew offers SUPers some valuable top tips for SUP surfing Surf Snowdonia…

“It’s not as easy as it seems at first; there are a few tricks to managing the artificial wave. I was lucky enough to visit with the Starboard Team and found that there are a few differences between SUPing the wave and surfing it, so here are my experiences that may help the first time SUP’er get along a bit faster.”

1) When booking sessions, bear in mind that it will take you an hour long session just to get the wave worked out. So if you’re going up, book yourself an hour slot to “get the feel” for it, then take a break for a couple of hours and try it again later. The good thing is that once you’ve got it dialled you’re pretty much set. Each wave isn’t exactly identical, but they’re pretty close.
2) The fresh water seems to shave a least 5-6L worth of volume off of your board, so be prepared for a less buoyant experience, or if you have more than one choice of board go for the larger one. I found it was necessary to go one size up. I used a 9’0 Carbon PRO for my session, but I think my ideal board would be a 8’0 Hypernut (I usually ride a 7’8 HN)
3) It’s colder up north, so if you’re from further down south pack those boots! Also boots seem to make the sides less slippery; some people struggled at times getting out of the water.
4) If you’re on the advanced wave give yourself some space to paddle into the wave. You want to catch the wave at the Advanced Take-Off sign, so start further back and when you see the pulley cable start to move, start paddling. There is lots of conflicting residual current caused by the plough and it seems to setup a “downstream drift” so you will find yourself drifting towards the take-off point if you start above it.
5) Stick close to the fence, but not right on top of it. I found this to be one of the trickiest parts. If you’re too close to the fence you’ll get sucked onto it and miss the wave, but if you’re too far off of it you’ll loose the section.
6) Fight your instincts; as you take the wave you have to immediately race to the fence, which is right next to you, but the wave simultaneously pushes away from the fence while breaking towards it. The net result is if you go straight you end up moving away from the fence and away from the breaking part of the wave into the white-water.
7) Backhand is much harder than forehand. It was that way for everyone. It took significantly longer to master for virtually everyone.
8) The inside section can be surprisingly brutal and shallow, so beware if you’re riding a wave all the way to the inside, it has a habit of suddenly dumping on a shallow shelf and it’s not kind to boards!

All–in-all it’s more comparable to a standing wave in a river than an ocean wave, but once you’ve got the “break” mastered it can be a unique opportunity to practise your moves in a predictable environment that allows you to focus on your technique rather than wave selection or adapting to conditions.

Wave pools are the ideal place to find that guaranteed wave and practice those tricky manoeuvres. But if it’s your first time there, as with any new wave be prepared for a few frustrations before you get it dialled! But it will be worth it. Surfing inland is definitely a serial experience.