Video highlights from the Battle of the Thames – produced by Stuart Howells.

Last weekend the ‘Battle of the Thames’ SUP race took place in London, hosted by Blue Chip and the fourth race on the UK SUP Clubs race series. There was a great turnout, great weather and a great vibe, making it a fun day out for everyone of all ages and abilities.

SUP competitor Andrew Pieterse gives us a taste of how the day was for him;


“One of the most iconic UK races on the UK SUP Clubs circuit, the ‘Battle of the Thames’ kicked off again in 24 degree heat in London. Yes, 24 degrees! Not quite Nicaragua, but enough to break into a decent sweat for the first time this year while paddling down towards the Kingston bridge. It’s hard to believe that just a few short years ago an entry of 40 people was considered a big event, this year 140 people entered. The BoTT was the first race I ever participated in and it got me going on SUP racing. So for me it’s always a special one, but it certainly isn’t the easiest, despite deceptively calm conditions at the start!

Lining up on the start line one is deceived into the serene calm of the river looking so peaceful in the glistening sun. Then the start hooter goes. The peaceful calm is turned into a churning mass as the racers charge into the ever narrowing canal on the start line and wakes bounce off of the embankment and reverberate back and forth. What the hell just happened?!!-  keep your head down, stay onboard and try to paddle as hard as you can! Suddenly after about 150 meters the narrow canal opens up to the wider river and you are no longer just in survival mode, but start scanning the field to figure out what’s going on and who is likely to be a good partner for a draft train. That idea went out the window very quickly as the constant barrage of wakes from all directions from just about every water craft imaginable constantly batters one from side to side and makes staying on a wake almost more effort than is worthwhile. So in the end it was a hard slog with most racers singularly battling out the 10 miles on their own and getting sunburnt in the process! Fortunately there were lots of people along the banks shouting encouragement and it was genuinely just a great day to be on the water, race or no race !

There were some amazing performances on the day and I couldn’t possibly comment on all of them. One of the most impressive performances was certainly off the water on the part of the organizational team, who did an exceptional job. On the water Peter Kosinski certainly seemed to do a fly-by in the 12’ 6 class, as did Andy Joyce with a great performance, but given the 27 years of age difference between the two, Andy’s performance becomes exceptional. It would have been great to comment on the 14 foot class, but they where just too damn far ahead of me (again!).

All in all another great race and well worth the trip down to the big smog to enjoy some urban racing at it’s very best.” 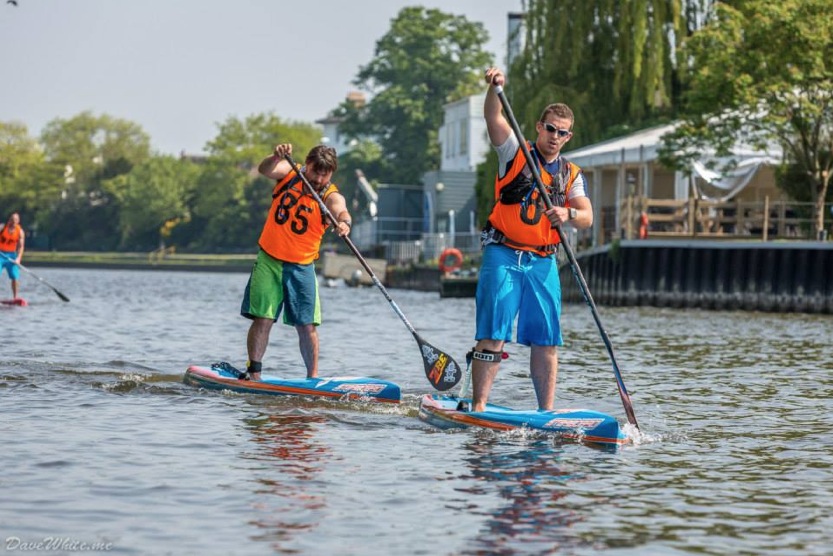 12’6 male winner Peter Kosinski had this to say about his performance:

“The 2014 Battle Of The Thames was my best performance for myself so far this year. I had a game plan early on in the race which I kept and sprinted out the first couple of km’s to build a lead which I was comfortable with, then after doing the hard work grind the rest of the race out. It was mild and with little flow on the river it was truly a flat hot course. “ 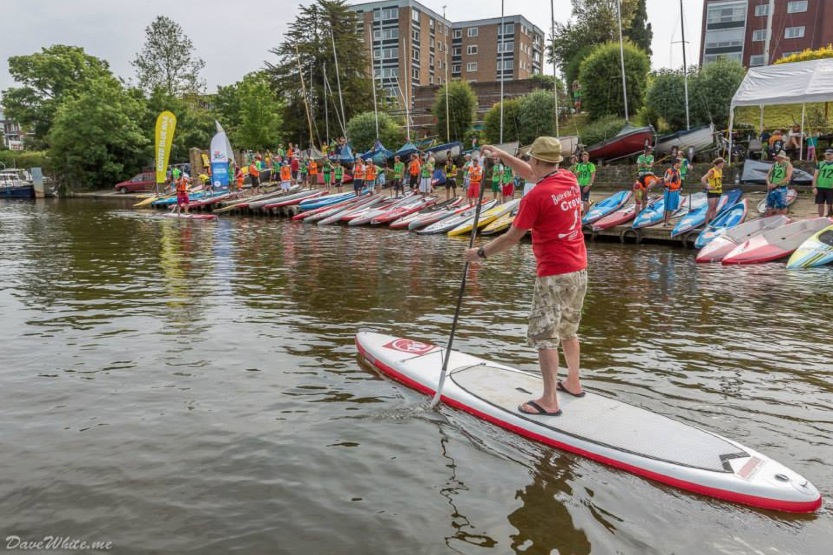 Pete Holliday from UK SUP Clubs gives SUPboarder a review of how the race series has been going so far, and who to look out for in the 2014 SUP race scene;

“So we’re 4 stages down of the 10 event UK SUP Clubs race series.  This is the first year we’ve ever had a proper SUP race series in the UK and it’s going really well.

The concept of the series was conceived late 2013 by a collection of the UK’s established SUP clubs. The grass roots local clubs scene has been working hard for the last few years putting on events, establishing membership bases, running social paddles, coaching and more. By pulling together as a collective unit we’ve been able to make the race series a reality. The goals were to set in place some professional racing standards, present a multiple event series to judge who are the best paddlers in the UK, encourage newcomers into racing and generally have some fun! We’ve been working closely with international organisation SUPAA to test some racing rules and event standards which have helped with consistency, safety and communication.

The series has 5 flat water distance races and 5 technical races (in and out of there surf) with best 6 scores going towards an ongoing league table.

The early part of the season has been manic with 4 races across the last 6 weeks. The top contenders looking strong already are Ryan James taking the mens 14ft distance races convincingly, Ollie Shilston (who has just represented GB at the SUP worlds) in 12’6, Jo Hamilton Vale 14ft ladies and we’re seeing some brilliant battles in 12’6 ladies with Fran Blake and Lindsay Frost going head to head sprints every finish! Then there’s the young guns and dark horses of Pete Kosinski & Aaron Rowe who are putting on incredible performances this year beating most of the men and these guys are still in the junior age group. Ben Payne in his first serious year racing has been hot on the tail of Ryan putting in some seriously strong performances.

The coolest thing I’ve noticed so far are all the battles going on further down the pack, proving it’s really not all about winning. It’s the close fought battles between friends sparking the competitive nature in a few guys and girls… that’s where the real excitement lies. There is a great buzz at the finishing line. I love listening to everyone relaying stories of their battles and position changes throughout a race.

The events so far have been sell outs with nearly 400 paddlers taking part so far which is great progression for the SUP scene in the UK. It’s the mass participation element that will see the sport continue to grow and standards rise. We’ve seen so many people turn up at the 4 events so far who have never raced before. Taking the Battle of the Thames for example many of the paddlers had never raced, let alone paddled 16kms but put aside their fears and got out there and kept on paddling.  The courage and mental determination shown by these guys and girls is mind blowing.  A couple of the paddlers were out for nearly 3hours at the Thames but didn’t give up.  Huge personal accomplishments and just brilliant to see!

With 6 more races to go the series is far from decided. Next up is a technical race at Carbis Bay hosted by WeSUP. This is part of a larger ocean festival with Outrigger canoe races, surf skis and prone paddling. Integration of SUP into the larger picture of water and paddle sports will really help cross over and growth as well as awareness of what we do in the wider community.

Paddlers can find out about the upcoming events on our Facebook page by clicking on the events tab. We aim to have all event information up 3 months before the race which is a key part of communications goals, ensuring people have loads of time to plan and prepare. Race rules and standards can be found on the website

I’d like to say a huge thank you to all the paddlers who have supported the series so far. We hope you’ve enjoyed the events, the feedback I’ve had has been really positive so far. There’s a lot more still to come and lots of other ideas at UK SUP Clubs to cater for other sup disciplines such as surf and downwind. Thank you to all the clubs who have hosted events and for all the hard work they have put in growing the sport and covering the social paddling & development aspect of SUP.”